Defining A Blizzard, Its Characteristics, And How It Occurs

The word "blizzard" often gets tossed around and used very loosely when referring to cold stormy weather. However, an actual blizzard is a devastating enough event to be classified as a natural disaster.

A blizzard is a powerful snowstorm characterized by heavy snowfall and strong winds. A storm is classified as a blizzard when visibility is limited to or less than 400 meters or 0.25 miles, winds speeds of or exceeding 56 km/h or 35 mph, and the storm lasts for a period of at least three hours.

The speed at which natural disasters occur is increasing every year at an alarming rate and doesn't show any signs of slowing down. The majority of these events are directly or indirectly the result of weather conditions.

With so much attention given to other natural distastes like drought, flooding, and hurricanes, the dangers and impact of blizzards often get overlooked.

The main focus of this article will be on what a blizzard is, how it is formed, as well as the effects and consequences of this extreme event. We will also have a look at other natural disasters that are the result of weather activity.

What Is A Blizzard?

Before getting into the detail of how a blizzard develops, all the variables involved, as well as the effects and influences of these intense storms, we need first need to define what precisely a blizzard is:

A blizzard is a powerful snowstorm characterized by heavy snowfall and strong winds. A storm is classified as a blizzard when visibility is limited to 400 meters (0.25 miles) or less, winds reach speeds of 56 km/h (35 mph) or more, and the storm lasts for a sustained period of at least three hours.

As the definition clearly illustrates, no matter how unpleasant & violent a heavy snowstorm may be, it will not necessarily be classified as a blizzard. The criteria required to declare a blizzard (intensity, wind speed, and duration) highlights just how devastating this event is.

As an indication of just how serious a blizzard gets taken, your local or national weather service will only issue a "Blizzard Warning" when all three requirements are in place. To recap, they are: When just two of these three requirements are in place, a weather bureau will reduce the outlook and only forecast a "Heavy Snowfall Warning."

Not all blizzards require snowfall to take place. A ground blizzard occurs when snow or ice already lying on the ground gets picked up by a strong wind and blasted across the surface to create complete whiteouts and freezing conditions.

How A Blizzard Forms

A blizzard can take place almost anywhere when the conditions are right. However, these conditions typically occur in certain parts of the world, like Northern Europe and the north of the United States, which are ideally situated for these conditions to occur.

Usually, the conditions needed for the creation of a blizzard are as follows:

The elements needed can also occur on a more localized level. No matter what the scale, how a blizzard form remains the same, which we will describe in the following paragraph.

Blizzards occur almost exclusively in the Northern Hemisphere as they favor the conditions necessary for the growth of this intense type of storm. As a result, the warm air originates from the south at the Tropics and the cold air from the north at the Polar Regions.

It starts with a low-pressure system that develops near the vicinity of warm & humid, as well as cold air masses. As it strengthens, it draws in the cold air from the north and also the warm air from the south.

The air that is sucked in by the low-pressure cell rotates counterclockwise around the center of the system. When the two air masses come in contact, the cold & dense air is forced underneath lighter warm & moist air.

As the humid air rises, it condensates and forms water droplets, which fall through the layer of freezing air below it. The cold air turns the raindrops into ice pellets, snow, or freezing rain, which, along with the snow and ice already on the ground, gets picked up by the wind.

If the collision between the warm and cold air is strong enough, with a large difference in temperature between them, it will strengthen the low-pressure system even further, causing wind speeds to increase and create the conditions favorable for the formation of a blizzard.

These conditions are often assisted by geographical features such as mountains or valleys, which can funnel and strengthen the wind speeds to help create blizzard conditions.

Effects Of A Blizzard

The effects of a blizzard can be widespread and devastating. Its biggest danger, though, is the speed at which it occurs. This endangers life and causes damage on a variety of fronts. Here are just a few examples:

1) Injury And Loss Of Life

The high speed at which snow and ice are blown around, combined with the wind chill effect, can put anyone caught outside when a blizzard hits in immediate danger. It can cause frostbite and hypothermia in record time, which can often lead to fatalities.

The amount of snow and ice, able to be transported by the winds in a blizzard, can quickly cause a person, house, or even entire villages to be completely covered in minutes.

In 1972, a blizzard in Iran buried 200 houses and caused 4 000 deaths, with snowfall covering the ground up to around 26 feet (7.9 meters). This is just one of the numerous blizzards that were responsible for countless fatalities over the years.

The speed of the wind itself can be destructive. Accompanied by snow and ice, a blizzard has the power to blow over power lines and light structures.

The ability of these storms to move large amounts of snow in a short time means structures can quickly be covered with tonnes of snow. Especially when blizzards last for days, the weight of the snow can cause structural collapse and severe damage to infrastructure. The low visibility or complete whiteout is extremely disruptive to traffic, making travel by any form of transport virtually impossible. It can bring a whole city to a standstill for the duration of the blizzard.

The previous sections helped to define a blizzard, how it is formed, and its effect on its environment. The focus can now shift to briefly looking at other extreme weather events and the natural disasters that occur as a result.

These devastating storms need no introduction. Both start as a tropical depression in the warm subtropical waters. As it travels north and gains strength, it turns into a tropical storm, and if the conditions are right, a hurricane is formed.

When the storm travels south, the same growth pattern occurs, only this time the rotation of the winds is clockwise around the low-pressure system.

You can read the in-depth article about hurricanes and cyclones here.

Flooding is the single most devastating natural disaster that can occur in a single event. During a hurricane or monsoon, it is not the wind and rain that cause the most damage but the mass of water that wipes away or penetrates everything in its path.

You can read more about the devastating effects of flooding in this same article. 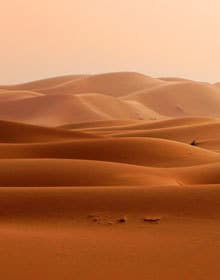 Whether you believe in Climate Change or not, you cannot deny the rising temperatures and accompanying droughts that our planet is experiencing at an increasing rate. This slow-moving natural disaster is turning previously fertile and habitable land into deserts.

This is where desertification comes in. To find out more about how our planet's increasing temperatures are changing our environment and what desertification is, you can read the complete article here.

Although extreme and stormy weather conditions frequently occur in locations around the globe, not all of them qualify to be labeled a blizzard, as this article clearly illustrated.

It highlighted the conditions that define this extreme meteorological event, how it is formed, and its effect on human activity and the environment.

What Is The Difference Between A Hurricane, Typhoon, And Cyclone?
Many of us are familiar with the terms "hurricane, typhoon, and cyclone." It is easy to think that these storm[...]
Read More
The Difference Between Ice, Snow, And Hail – And How Each One Is Formed
They may be similar in some ways, but are actually very different in the way they look and feel, and[...]
Read More
What Is A Tornado, How Is It Formed, And What Are Its Main Characteristics?
You may have never seen one person, or you could have experienced multiple events each year, but most readers will[...]
Read More