Freezing Rain vs Sleet: Understanding The Differences Between The Two

They are both occurrences of water rapidly cooling down, but that is where much of the similarities between freezing rain and sleet end.

If you live in a region where temperatures frequently drop to below freezing point, you are probably already quite familiar with the terms "freezing rain" and "sleet."

Unfortunately, these two weather phenomena often get mentioned during weather forecasts and meteorological discussions, without a proper explanation of the meaning of each event. This can lead to confusion and make it hard to distinguish between the two.

The Difference Between Freezing Rain And Sleet

As will be illustrated throughout this article, there are several similarities, but also some clear differences between freezing rain and ice. Before delving into a more in-depth discussion, one first needs to establish the core differences between the two events are:

What Is The Difference Between Freezing Rain And Sleet? 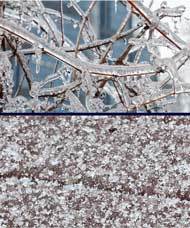 Freezing rain does not travel far enough through a layer of cold air to freeze, while sleet travels a longer distance through the freezing layer, which allows it to turn into solid ice.

As a result, freezing rain reaches the ground in liquid form and turns into ice on contact while sleet falls on the surface as solid pellets of ice.

Although both freezing rain and sleet fall through a layer of air with sub-zero temperatures, it is clear that they have very different characteristics, with each one also having a contrasting impact on their surroundings.

The most significant visual difference is that freezing rain falls on the ground in liquid form while sleet reaches the surface as ice pellets. A common misconception is that sleet as a form of ice will pose the most significant danger, but it is not that simple.

The best way to understand the similarities and differences between these two meteorological phenomena is to take a closer look at each one.

Freezing Rain: What It Is And How It Forms

Although sleet has already been briefly defined earlier on, it is important to clearly and concisely state what it is before looking at how it forms: Freezing rain occurs when raindrops travel through a layer of freezing air too shallow to turn it into ice. Instead, it turns the precipitation into supercooled (cooled to below freezing) waterdrops, which instantly freeze when coming into contact with any object on the ground surface.

It is this last characteristic of freezing rain that makes it especially dangerous for humans, as will be explained in more detail shortly. The attributes of this phenomenon can largely be attributed to the way in which it forms.

Freezing rain is often closely associated with the arrival of a warm front, which creates the ideal conditions for the formation of this occurrence. This is especially evident when this front moves into a region that already experiences subzero temperatures.

It is this last step in the formation of freezing rain that makes it so dangerous to human activity in affected areas. As it comes into come into contact with a surface, freezing rain covers it with a layer of ice that is almost invisible to the naked eye.

The layer of ice is extremely slippery, which makes any movement over it very hazardous. On icy roads, it can lead to vehicles losing control and causing potentially fatal accidents. On sidewalks, pedestrians are at danger of slipping and serious injury.

Sleet: What It Is And How It Forms

Before shifting the attention to the steps involved in the formation of sleet, the following summary will help to understand how sleet differs from freezing rain. Sleet occurs when raindrops travel through a deep enough layer of freezing air to allow it to form ice. As a result, the frozen precipitation reaches the ground in the form of ice pellets.

If the layer is too shallow, freezing rain occurs. A deeper layer, however, allows raindrops to travel further, leading to the formation of ice (sleet).

The following steps will illustrate just how similar the process of forming sleet is to the one responsible for the creation of freezing rain:

From these steps, it is clear to see how both freezing rain and sleet follow the exact same path up until point five. It is the depth of the layer of subfreezing air that allows raindrops to travel far enough to form ice pellets (sleet).

Like freezing rain, sleet is responsible for creating dangerous conditions on roads, sidewalks, and other surfaces it accumulates. Fallen sleet is already quite hazardous, but as it starts to melt and mixes with snow, it becomes very slippery and potentially deadly.

Freezing rain and sleet are two weather phenomena that have several similarities, but also some core differences that set them apart. This post clearly highlighted these differences.

The article also illustrated how a simple variable, such as the depth of the layer of subfreezing air, completely change the characteristics of precipitation and result in two completely different weather occurrences.