What Are Gale Force Winds And How Are They Formed?

From time to time, strong, persistent winds may occur that make just staying on your feet a battle. We all experienced them. But what are these gale force winds, and what are their characteristics?

A gale force wind or gale is a strong, persistent wind ranging from 50 km/h or 31 mph to 102 km/h or 63 mph and is typically associated with but not limited to coastal regions. According to the Beaufort Scale, gale force winds can be broken down into four subcategories.

The strong, persistent gale force winds we are discussing in this article are the prolonged gale force winds with gusts strong enough to cause significant structural damage and the ability to literally blow you off your feet.

These winds can sometimes occur without any apparent presence of a strong weather system and can last a whole day. One needs to investigate further and find out what exactly these gale force winds are to understand what is causing them in the first place.

What Is A Gale Force Wind? 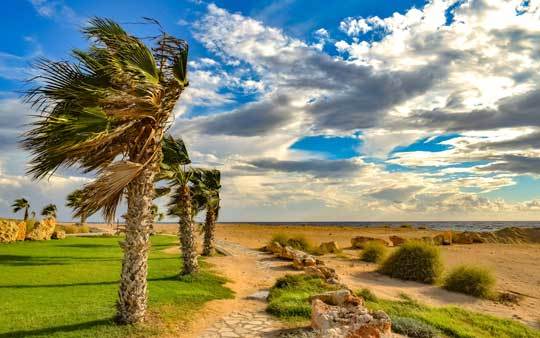 A gale force wind or gale is a strong, persistent wind ranging from 50 km/h or 31 mph to 102 km/h or 63 mph and is typically associated with but not limited to coastal regions. According to the Beaufort Scale, gale force winds can be broken down into four subcategories.

Typically, these strong winds are caused by a rapid drop in air pressure (indicated by a steep pressure gradient.) and usually associated with coastal regions.

It has to be noted that the US National Weather Service classifies a gale as a wind with speeds of 63 - 87 km/h (39 - 54 mph), so the classification of this type of wind may vary from one region to another.

Using the word gale to describe these strong winds is actually a very appropriate word choice when you look at the word's origins. The word gale stems from the Old Norse word "galinn," which literally means "frantic," "mad," or "tiresome."

Naturally, winds of this wind speeds can be very dangerous and destructive. As a result, whenever a gale is predicted, it is normal for weather forecasters to issue gale warnings.

Even though different countries and regions have different definitions of what a gale force wind is, using the Beaufort Scale has some clear advantages: Diagram displaying part of the Beaufort Scale that contains the 4 categories of  gale force winds (highlighted in red). Click on image to view the full Beaufort Scale.

It not only breaks down the different gale strengths into 4 separate categories, but each one is clearly defined with its own description and associated land & sea conditions highlighted.

It also shows where gale force winds sit in comparison with other wind strengths, which helps you to view any type of wind in context. It is helpful to assess the threat a gale poses and accurately convey relevant information to a third party familiar with this classification.

(The Beaufort Scale was created by Rear-Admiral Sir Francis Beaufort, a hydrologist in the Royal Navy in the 1830's. This scale was widely adopted throughout the Navy and even adapted for non-naval application in the 1850s.)

As is the case with most other weather phenomena, things are not as simple as the definition above may suggests. There are actually a number of different factors and weather systems that can form gale force winds in a variety of ways.

What Are The Cause Of Gale Force Winds

Wind is the result of air flowing from an area of high pressure to low pressure. This is the reason why there are almost always winds of varying strength present around a low-pressure system.

(You can find out more about the formation of wind, as well as its relationship with high and low-pressure systems in this in-depth article.) Tropical storms, cyclones, and hurricanes illustrate this point very clearly. Depending on the low-pressure system's strength, winds of gale-force strength are reached very quickly and can quickly build up to reach hurricane strength wind speeds.

Gale force winds are not just formed as a result of storm systems, though. Sometimes, on a seemingly otherwise clear day and pleasant day, you can suddenly be hit by winds quickly building up to gale force speeds.

Anyone living at the coast, specifically in areas where the coastline's relief plays a part, may be very familiar with these winds. Simply put, a gale force wind in these areas can sometimes be seen as a "sea breeze on steroids"...

During summer months, both the surface of the ocean and land are heated up by the sun. The land heats up much more quickly than the ocean. During the afternoon, the land also cools down much quicker than the ocean.

This sea breeze can sometimes turn into a gale force winds in specific areas and under certain conditions. For example, Cape Town, South Africa, is notorious for its strong gale force winds often experienced during summer months.

These gale force winds at coastal regions are formed as a result of mainly 2 factors:

This results in gale-force strength winds in certain areas among the Cape Peninsula. It is not that uncommon for winds to reach speeds of 120 km/h (75 mph). Cape Town is just one example of this phenomenon that takes place in coastal regions all over the world. San Francisco is also famous for its strong gale-force winds during the summer months.

Here also, a combination of relief and the big contrast in ocean & land temperatures is also responsible for these strong winds. Especially in the San Francisco Bay Area, wind funnel through at the Golden Gate, reaching gale force speeds with gusts of up to 64 km/h (40 mph).

As you would have been able to conclude from this article, gale-force winds (or simply gales) are not winds specifically associated with any particular weather system.

Rather, winds are classified as gale force winds mainly because of the speed at which they are traveling. (Not where they take place or how they are formed.)

Therefore as already stated earlier, winds measuring between 7 and 10 on the Beaufort Scale,  indicating wind speeds of between 50 and 102 km/h (32 - 63 mph), are all considered to be gale-force winds.

We also touched on how these winds are generated, as well as briefly touching on the origins of the term to better understand its use.

Windiest Place On Earth – A Look At The 11 Windiest Locations On The Planet
A lot of debate is raging about the location of the windiest place on Earth, but there are a few[...]
Read More
Canyon Wind: What It Is And How It Forms
Wind is usually the result of a change in air pressure over distance or the resulting pressure gradient. But physical[...]
Read More
Defining Wind, How It Forms, And The Different Types Of Winds
One type of meteorological occurrence every reader will be familiar with is wind. In this article, we examine what exactly[...]
Read More