What Is A Weather Radar And How Does It Work?

Many weather enthusiasts know the various means of collecting meteorological data but don't realize the importance of using radar technology. We examine what a weather radar is and how it works.

A weather radar is an observational instrument, typically a pulse-Doppler radar, used in meteorology to identify and picture various types of precipitation, measure their magnitude, and track their movement. It does so by sending out electromagnetic or microwaves and analyzing the returning echoes.

Radar technology has been around for some time, with its origins dating back as far as 1886, when scientist Heinrich Hertz illustrated that radio signals could be reflected off objects. The name is an abbreviation for the term "Radio Detection And Ranging."

While using it to spot enemy aircraft during World War II, radar operators discovered that their systems were able to detect rainfall as well, which caused enemy targets to be obscured in many instances.

After the war, some systems continued to be used by scientists to experiment with the detection of precipitation. Over time this leads to the implementation of weather radars by governments and meteorological agencies worldwide.

This will be one of the main focus points of this article. The aim is to explain and illustrate precisely what a weather radar is, its characteristics and the way in which it is used for all meteorological purposes.

Characteristics Of A Weather Radar

Before delving into its characteristics and how it works, one first needs to define exactly what a weather radar is:

What Is A Weather Radar?

A weather radar is an observational instrument, typically a pulse-Doppler radar, used in meteorology to identify and picture various types of precipitation, measure their magnitude, and track their movement. It does so by sending out electromagnetic or microwaves and analyzing the returning echoes.

Imagine a giant golf ball sitting on top of a tee. You now have a pretty good idea what a weather radar looks like, as the accompanying picture clearly shows.

Weather radars come in different sphere sizes and tower heights, depending on their specific purpose, the type of technology used, and the topography of the surrounding terrain.

The dome-shaped sphere, situated at the top of the tower, is called a radome. It houses the rotating antenna/dish, which is installed in the center of the dome.

How Does A Weather Radar Work?

While rotating, the dish sends out radio (electromagnetic/microwave) waves up to a maximum distance of around 230 km (143 miles). 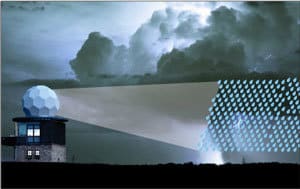 If the signal encounters any precipitation (rain, hail, or snow), it is reflected back to the radar tower, which interprets the reflected signal (also called the echo). The radar can determine a lot from the characteristics of the reflected wave.

The length of time it takes the echo to return to the sender indicates how far away the precipitation is from the radar. The strength of the echo, on the other hand, provides a strong suggestion of the type of precipitation encountered (rain, hail, or snow).

Although this varies from one radar to another, a signal is normally sent out with a frequency of around once every six to ten minutes. The resulting animated radar image forms a thirty-minute loop.

Although a radar image does not give you a clear and definite forecast, it shows you where the rainfall has been, as well the direction in which it may be moving.

On modern-day weather systems, the results captured by a weather radar are displayed as a color image on a display screen.

A color scale is used to show the intensity of the precipitation. Usually, the most intense form of precipitation is indicated by black. (In many cases, black represents hail.) 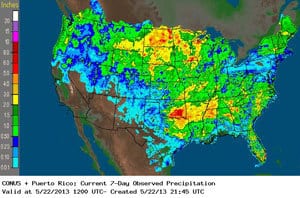 Color scales are also used to indicate the amount of rainfall, not just the intensity. The two terms are often used interchangeably, which can be confusing.

Be sure to read the weather scale that accompanies every radar image to confirm what each color means for that specific image.

Each radar image has a timestamp at the bottom of the image, which is in Universal (Greenwich) Time or UTC. This helps anyone viewing the picture to know when the image was created, no matter where in the world or in which timezone they are.

Limitations Of A Weather Radar

With all the advantages and benefits of the weather radar, they are not without their shortcomings or limitations. Here are a few of the most notable drawbacks:

Advances in radar technology have allowed us to add to the functionality of the conventional radar. The Doppler radar system is one such case. So, how does a Doppler radar work? This ability is a very important function of modern weather radars implementing the Doppler effect. It allows meteorologists to determine the direction a weather system is moving in with a much greater degree of certainty.

In practice, it is used by organizers of outdoor events to better plan and adjust activities. It is also used in sports where weather plays a big role (like cricket and motorsport). Knowing if and how quickly rain will arrive has become a vital part of their planning and strategy.

It is clear to see how important the addition of weather radar systems is to the field of meteorology. Used alongside more traditional forms of weather detection, it helps to produce much more accurate weather forecasts.

The addition of the Doppler radar (which is now slowly replacing all traditional weather radars) has further enhanced the capabilities of weather radars. It is now commonly used in many outdoor events where the weather conditions play a crucial role.

Weather Rockets: A Special Kind Of Sounding Rocket
Weather stations measure conditions at ground level, while weather balloons take readings up to 40 km high. Measurements at greater[...]
Read More
Weather Thermometers: What They Are And How They Work
Most of us are familiar with thermometers and know they measure temperature. The weather thermometers used by meteorologists work on[...]
Read More
Weather Balloon Facts: What They Are And How They Work
The use of weather balloons is sometimes mentioned during weather forecasts and meteorological discussions. For many readers, though, it may[...]
Read More