Jet Streams: What They Are And Their Impact On Weather Patterns

Most of us are familiar with surface winds caused by temperature gradients and changes in topography. But few readers are aware of the strong winds, called jet streams, forming high in the atmosphere.

Jet streams are narrow bands of strong upper atmospheric winds close to the tropopause, traveling at high velocities from west to east. These permanent winds form due to temperature differences between warm and cold air masses and circumvent the Earth, following a weaving or meandering path.

We don't experience or see the direct impact of these powerful winds, but they are essential for the creation of weather systems across the world. They are so influential that one can go as far as stating that a large number of major weather events cannot occur without them.

These winds are called jet streams and occur in specific regions at different heights around the globe. But what are these powerful winds, and how do they form?

In this post, we take a look at what a jet stream is and how it forms. We also examine its effect on weather systems.

Before we can examine how jet streams are formed and look at their effect on the weather, we need to define what a jet stream is first:

What Are Jet Streams? 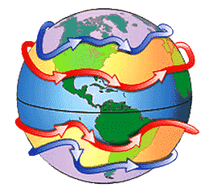 Jet streams are narrow bands of strong upper atmospheric winds close to the tropopause, traveling at high velocities from west to east. These permanent winds form due to temperature differences between warm and cold air masses and circumvent the Earth, following a nearly straight or meandering path.

These phenomena are referred to as narrow bands (or ribbons) of wind since it is hundreds of kilometers in width but only a few kilometers in depth.

Although relatively stable in their position, they can move more to the south or north, depending on the season, and influence the weather conditions below them during the process.

Both the Northern and Southern Hemisphere have a polar and subtropical jet stream, creating four permanent jet systems in total surrounding the Earth. Both types of jets are created by a difference in temperature between two air masses.

Smaller, temporary jet streams also exist. African Easterly and Somali Jets are two of the better-known ones. Other occurrences include barrier and valley exist jet streams. They are not nearly as influential as two primary systems, though, which will be our focus.

How Are Jet Streams Formed?

Both Polar Front and Subtropical Jets are formed in the same manner. There are subtle differences, though, which is why each system's formation and characteristics should be looked at separately to avoid any confusion.

Formation of the Polar & Subtropical Jet Streams in the Northern Hemisphere

The Polar Front Jet Stream And How It Is Formed

The Northern Polar Jet sits above the polar front and is the result of the temperature difference between the cold arctic air and warm tropical air. As the two air masses meet, the difference in air pressure between them produces what is called a pressure gradient force.

(Air always flows from an area of high to an area of low pressure. The warm tropical air has a much higher air pressure than the cold air from the North and South Poles, hence the strong pressure gradient force.)

In the Northern Hemisphere, one would assume the strong pressure gradient will cause the warm tropical air to flow northwards towards cold air over the poles. However, The Coriolis Effect forces the air to be deflected to the right.

In the Southern Hemisphere, the deflection is towards the left. As a result, a polar jet is a strong wind that is created along the border between the two different air-pressure masses, flowing parallel to the pressure gradient from west to east.

The Southern Polar Jet has the same characteristics as its northern counterpart and is created in the same way. Unlike the Northern Polar Jet, though, it follows a fairly consistent clockwise path around the Antarctic and does not shift or meander as much.

Since Antarctica is also far removed from any other landmasses and populated regions, the amount of seasonal north-south shifting in the jet stream will have very little, if any, significant effect on any human or plant life, as well as the environment.

The Subtropical Jet Stream And How It Is Formed

The subtropical jet stream occurs at 30 degrees north and south of the Equator. It is slightly weaker and forms at higher altitudes than the polar jet and can be found at heights of around 10 - 16 kilometers (33 000 - 52 000 feet.)

The subtropical jet in the Northern Hemisphere is also a result of a strong pressure gradient that is created by the temperature difference between the warm air from the tropical region and the colder mid-latitude air.

Due to the strong temperature gradient and the deviation to the right due to the Coriolis Effect, a strong band of wind flowing westward is created, The Subtropical Jet Stream.

Keep in mind that the formation of a jet stream involves complex processes, and the ones described here are simplified explanations to make these phenomena easier to understand. It still manages to capture the essence and accurately portray the basics of these systems.

How Does The Jet Stream Affect Weather?

To say that jet streams affect the weather is a mild understatement. They create and are the main driving forces of numerous major weather systems, as well as seasonal weather change across the world.

To name every possible event and occurrence that is either directly created or influenced by these powerful upper-atmospheric winds would be impossible and take up a whole encyclopedia. We will focus on the most important ways in which jet streams affect weather. During winter in the Northern Hemisphere, colder air over the Arctic shifts the polar jet south, bringing cold & wet weather to Northern Europe and the United States. During summer, the opposite occurs as warmer air from the Tropics moves into the region.

Jet streams do not follow a straight line but tend to follow wave-like and winding flows. These meandering flows are called Rossby waves, which are the result of variations in the Coriolis Effect and the underlying topography on the planet's surface.

Rossby waves have a big effect on the weather of a region, as the dips and peaks in the waves bring entirely different weather to an area. Depending on its speed, Rossby waves can last for a short or very long period, enabling it to even affect climate patterns.

Jet streams also influence aviation. Due to its strong wind speed, airlines make use of it to reach their destinations faster with less energy. Flying against it must be avoided for obvious reasons, which is why airlines keep a close eye on the position of jet streams.

The effect of jet streams is a lot more widespread than the few examples highlighted in this section, but these examples will help to explain how influential these powerful phenomena are in affecting weather globally, as well as the number of conditions it impacts.

As this article clearly illustrated, jet streams are one of the most crucial components in the forming of global weather patterns. They are formed in complex ways, and the explanations provided in this post were fundamental but enough to make it understandable.

In this article, we focused on explaining what a jet stream is and how it forms. The post also examined the different forms of jet streams and how each one is created.

Maritime Polar, Continental Tropical, Or Maritime Equatorial… The Types Of Air Masses And Their Characteristics
Although the terms in the title of this article sound confusing, they all form part of the six types of[...]
Read More
Defining Wind, How It Forms, And The Different Types Of Winds
One type of meteorological occurrence every reader will be familiar with is wind. In this article, we examine what exactly[...]
Read More
What Is The Coriolis Effect And How Does It Affect Our Weather?
Some readers will be vaguely familiar with the meteorological phenomenon, while others may never had heard of the Coriolis Effect.[...]
Read More